Benchmark on structured data persistence system is notoriously hard. Dflat won't claim to be fastest. However, it strives to be predictable performant. What that means is there shouldn't be any pathological cases that the performance of Dflat degrades unexpectedly. It also means Dflat won't be surprisingly fast for some optimal cases.

Following data are collected, and can be reproduced from:

I compared mainly against Core Data, and listed numbers for FMDB and WCDB from WCDB Benchmark (from v1.0.8.2) to give a better overview of what you would expect from the test device.

The test device is a iPhone 11 Pro with 64GB memory.

A Disclaimer: you should take a grain of salt for any benchmark numbers. These numbers I presented here simply to demonstrate some pathological cases for frameworks involved. It shouldn't be taken out of this context. In practice, structured data persistence systems rarely are the bottle-neck. It is more important to understand how you use it rather than what's the raw numbers in a light-workload device looks like.

First, we compared Dflat against Core Data on object insertions, fetching, updates and deletions. 10,000 objects are generated, with no index (only title indexed in Core Data).

Fetching 1,667 Objects evaluated both frameworks on querying by non-indexed property.

These are obviously not the best way of doing things (you should update objects in one big transaction, and fetch them in batch if possible), but these are the interesting pathological cases we discussed earlier. 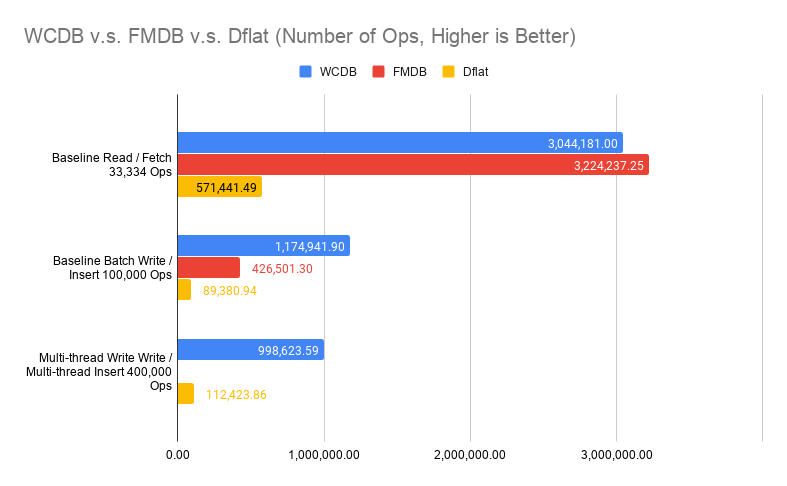 The chart compared against numbers extracted from WCDB Benchmark (v1.0.8.2) without any modifications. It compares ops per seconds rather than time spent fetching 33,334 objects. Note that in WCDB Benchmark, Baseline Read did fetch all, which is the best case scenario in SQLite. It also compares a simple table with only two columns, a key and a blob payload (100 bytes).

Multi-thread writes is indeed slower in our ideal case, because SQLite itself cannot execute writes concurrently. Thus, our multi-writer mode really just means these transaction closures can be executed concurrently. The writes still happen serially at SQLite layer. It is still beneficial because in real-world cases, we spend significant time in the transaction closure for data transformations, rather than SQLite writes.

The ceiling for writes is much higher than what Dflat achieved. Again, WCDB represents an ideal case where you have only two columns. Dflat numbers in real-world would also be lower than what we had here, because we will have more indexes and objects with many fields, even arrays of data.

Since Dflat doesn't introduce any optimizations for batch operations, it shouldn't be a surprise that Dflat performance scales linearly w.r.t. dataset size, as the follow chart will show. 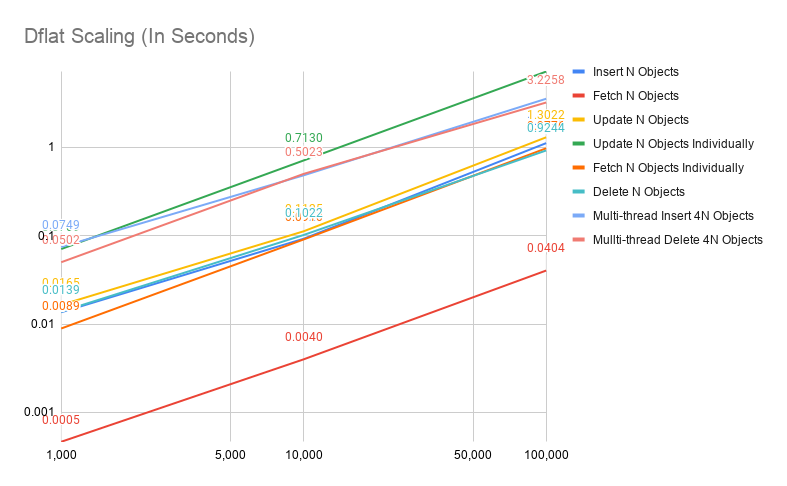 There are three parts of the benchmark: 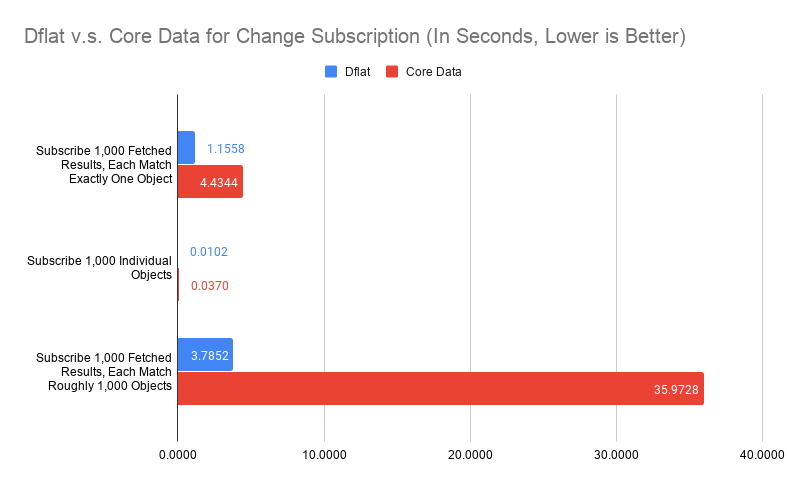 The number for both fetched results observation, especially on case 1, represents the most pathological case of them all. It is particularly troublesome for Dflat because fetching 1,000 objects from disk individually would take around 20 milliseconds. Thus, if we would take SQLite.swift approach of identifying whcih table changed and simply refetch every query on that table, we could end up more performant. Although for case 3, refetching from disk would definitely be slower (close to 6 seconds for 1,000 queries, each with 1,000 objects).

From the benchmark, Core Data suffered similar problem, while being worse. Again, this is a extreme case. For mobile apps, you should only have handful of query subscriptions, with probably at most thousands of objects for each query, and unsubscribe changes as you navigate away to other pages. These extreme cases hardly realistic, you are not going to see 35-second stutter from Core Data just because there are 10,000 objects updated and you happen to have 1,000 table views need to be updated. In reality, subscribe to individual queries by primary key seems to be a big no-no. If you want to observe individual object, you should just subscribe individual object as case 2 shows.

However, it does expose that our message-sorting-and-delivery mechanism not working as efficiently as we expected. Fundamentally, Dflat's change subscription works best with incremental changes, because we evaluate every changed objects against all fetched request subscriptions related to that object. This design avoids trip to the disk on every transaction, but also relies on a reasonable implementation to evaluate every changed objects efficiently.

A quick test shows that looping over 10,000 objects with 1,000 string equality evaluation in Swift takes about 30 milliseconds. Profile shows majority time was spent on objects retain / release and function calls for Swift runtime. There are two ways to improve:

Both are quite doable, while each has its own challenges. For 1, we need to wrestling with Swift runtime, and its behavior can be erratic at times for obvious gains to be possible. Because I am not intended to delegate parts to C, it makes all harder. For 2, while it is not hard to implement, we use 3-value logic internally (to support isNull / isNotNull queries), that means for every turn, we need to sort with UNKNOWN. Having a robust and correct such implementation means to have much more unit tests to feel comfortable. We also need to balance when to linear scan and when to use accelerated data structures because for small number of changes, linear scan could be faster from previous empirical studies.